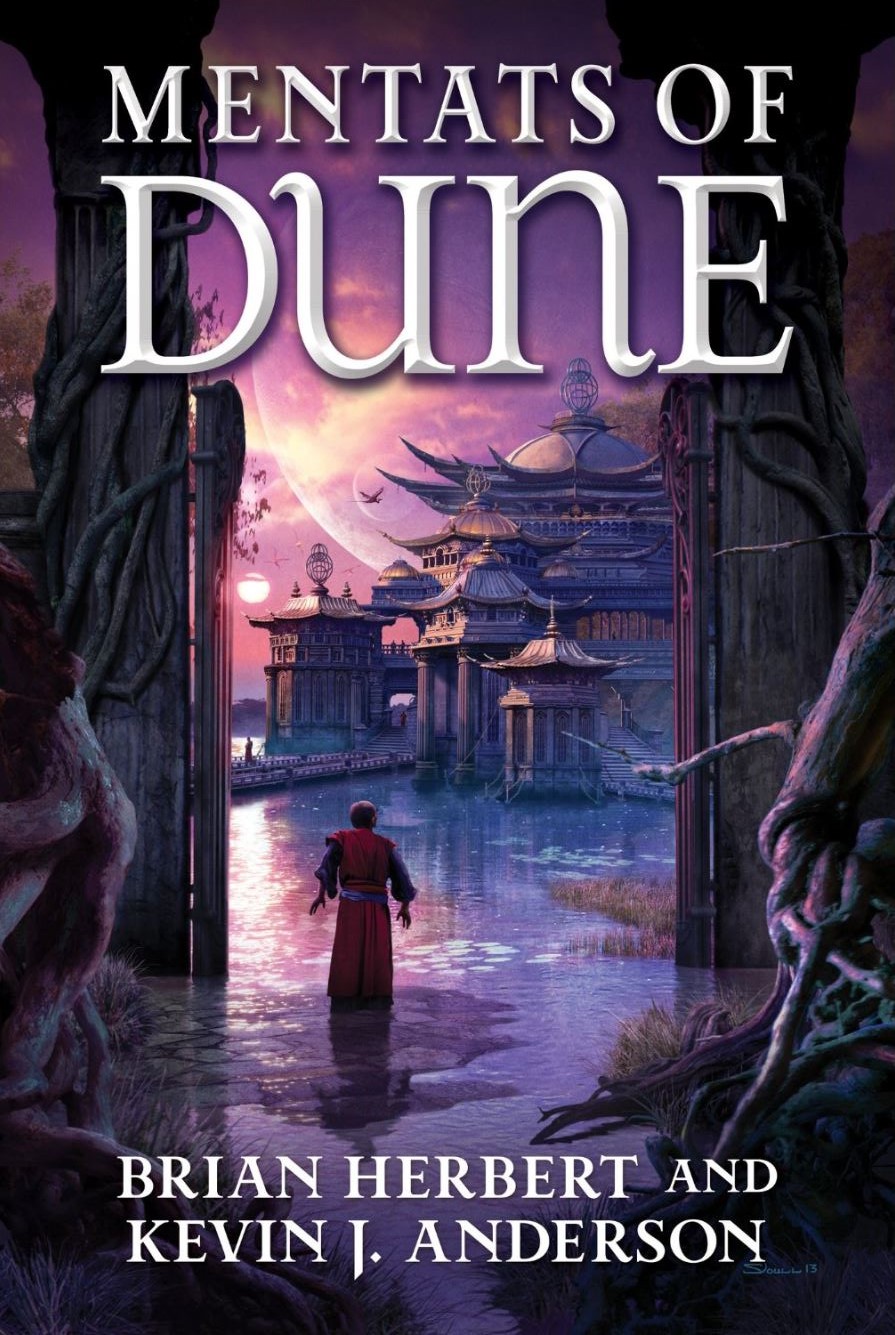 Another year has passed so we can read yet another novel of the Dune Expanded Universe. This year the book is entitled Mentats of Dune. Though there are many mentats in the story the title is mostly used for decorative purposes in a way similar to all Brian Herbert/Kevin J. Anderson Dune novels. Mentats is the second book in the Schools of Dune trilogy that focuses on the creation of the Empire after the Butlerian Jihad. Specifically it focusses on organizations such as the Bene Gesserit, The Mentat School and The Spacing Guild. As this is the second book in the trilogy it is blessed with not being obligated to lay down the story and characters as was the first book Sisterhood of Dune. The story focusses on characters that will head organizations famous for their secrecy and subterfuge and they manage to draw readers into their often harrowing stories. If you’re here for the free giveaway of a copy of Mentats of Dune you can scroll down to the bottom of the page.

However, Mentats of Dune also suffers a little bit of what fans disliked about the Star Wars prequel trilogy. Unlike the original trilogy which had lots of character of development that centered on Luke Skywalker in a hero’s journey the prequel trilogy focused on no one but the wider universe. The original Dune novels focused largely on Paul Atreides and to a lesser extend on Irulan Corrino. The expanded universe written by Brian Herbert and Kevin J. Anderson never manages to create an intriguing character such as Paul or Irulan, even when they were writing about them in the Heroes of Dune novels. Mentats of Dune hovers between the two extremes in that not a single character is at the center of it all but all characters do see considerable development. Several characters such as Taref the Fremen, Vorian Atreides and Valya Harkonnen have stories that didn’t interest me in the least. Instead characters such as Raquella and Dorotea of the proto Bene Gesserit, the Emperor Salvador and his brother Prince Roderick as well as the feuding Manford Torondo and Josef Venport have far more intriguing stories. Their stories are also deeply intertwined with progress being the result of both careful planning and accidents. Even so it is  a long list of characters and their relationship all too often seem completely devoid of any physical contact. By extension there is not much sex and seduction in Mentats of Dune either even though it was a staple with Frank Herbert and the early Dune novels of Brian Herbert and Kevin J. Anderson.

Mentats of Dune is a surprisingly easy read. The chapters are usually only four of five pages long and are character-centric similar to Game of Thrones. Alas the storyline focusing on Vorian Atreides and his feud with the Harkonnens doesn’t interest much, it feels as though we have been over this so many over already. Vorian reminds me a lot of the character Ned Stark from Game of Thrones. Near the end of the first book I was kind of rooting for his execution because his holier than thou attitude was starting to get on my nerves.

What is more interesting is that organizations such as the Spacing Guild prelude Venport Holdings, the precursor Bene Gesserit and the Mentat school all use thinking machines in some way or another. This seems to be deliberately at odds of what we known about the Dune universe. It is intriguing how Brian Herbert and Kevin J. Anderson manage to balance the factions in such a way that machines will inevitably be outlawed. Sadly the only thing that is missing is some real advancement of the House Corrino storyline. I suppose it is thousands of years before the Sardaukars were created and as such they seem to be much weaker in this time period despite occupying the imperial throne.

In short, Mentats of Dune is an effective continuation of the Dune Universe and I like it almost as much as the Dune: House Atreides or Dune: House Harkonnen books. However, it simply can’t compare to any of the books by Frank Herbert as it tries to hard to fill in the blanks in a spectacular way instead of trying to expand Dune in new ways unimaginable by readers.

In the last few years there have been some steady rumors that the original 1965 Dune will get another film adaption. The rumors usually suggested a single movie which I thought was a crime to the book I consider to be the Lord Of The Rings of Science Fiction. Franks Herbert’s Dune consist very clearly of three parts so I really believe that only a trilogy of movies can do it justice. Last time anything was heard from the project was when Paramount killed it in 2011, maybe just as well. Strangely enough we will be getting another movie about Dune, but it will be a movie about a failed attempt at making a Dune movie. The irony is dripping over my keyboard as I write this. As most fans will know, before David Lynch made his 1984 adaptation of Dune a Chilean director named Alejandro Jodorowsky tried to make his own Dune in the early 70’s. His project ultimately failed but has had a lot of consequences for other sci-fi movies such as Alien and The Matrix.

Jodorowsky’s Dune has already been released at Cannes last year and received excellent reviews. A general release is scheduled for March 28 this year.

Below you can see the trailer for Jodorowsky’s Dune…

After having read through my review copy of Mentats of Dune you will now have a chance to do the same. I will be giving away this copy of the UK edition (hardcover) to anyone who can come up with a title for the third book of the Schools of Dune story. I suggests you not submit a title like Navigators of Dune which may well end up being the real title if the rumors are to be believed. Post your title as a comment below this post. I won’t select any title in particular but I will choose a random winner from among those that have submitted. After the winner has been selected I will send an email requesting a proper address. So there is no need to write down your address or real name with your submission. Anyone anywhere can take part in the giveaway. I am not sure for how long I will keep the contest open. I think at least 2 weeks will be needed to get enough submissions.

Well, I am calling an end to the contest. It seems that Dave has automatically won. I have already send Dave a email asking for his address so I can send a copy of Mentats of Dune.