“We live in a twilight world“

“There are no friends at dusk“

Is Tenet too hard to understand?

Tenet is the latest movie by director Christopher Nolan, and as is traditional for the director the details of the plot can be hard to understood. On this page I hope to provide an in-depth analysis of Tenet’s themes and timeline. I will be using the tie-in media such as The Secrets of Tenet and the novelization. I hope they will provide some of the explanations that a visit to the cinema cannot provide. Furthermore, I have also included some diagrams created by some knowledgeable fans, references included. If you are uncertain what the movie is about you can always read my Tenet review.

Director Christopher Noland first conceived of a movie like Tenet over 20 years ago, roughly when he was making Memento. However, earnest work on a script only began in 2014. To underscore the use of the time inversion mechanism the title itself is a reference to the Sator Square, a Latin five-line palindrome that form a square. The word Tenet which is centrally located in the square means keeps, comprehends, possesses or masters. Sator on the other hand means founder or progenitor. Both Tenet and Sator are interesting references to the main characters of the movie: Protagonist played by John David Washington and Andrei Sator played by Kenneth Branagh. The other three words: rotas, arepo and opera are also featured.

For those eager to understand the weird timeline of Tenet here is the brilliant diagram created by @cookpete on Reddit. It tracks the major characters such as Protagonist, Neil, Kat and Sator and the moments they undergo entropy reversal.

I will clarify one point. After Sator manages to obtain the last artifact in Tallinn to complete the Algorithm he moves back in time. At some point he will revert to move forward and becomes ‘Older Sator’.

That said, there remain a number of open questions. One of those is the relationship between Neil (Robert Pattinson) and The Protagonist (John David Washington). It is clear the Protagonist experiences time and the film’s events much like we do, with intermittent entropy reversion. By the end of the movie he becomes aware that his future self has been communicating back. These instructions are made through Priya, through means unknown. But what about Neil. By the end of the movie I was convinced Neil is from the future using long stretches of entropy reversion. This allows him join the Protagonist at certain critical moments in time to influence events. However, few other people agree with this assessment and consider Neil to be current but being ‘in the loop’ earlier than Protagonist. What do you think? Is Neil is from the future there is a risk he will run into himself.

Philosopher David Kyle Johnson has already written a number of articles on Tenet, culminating in the book “The Palgrave Handbook of Popular Culture as Philosophy” published by Springer. In it he argues despite the fact everything in the world of Tenet appears fixed, unalterable even by reversing the flow of time it does not mean we should do nothing. You can read the first article here. I thoroughly enjoyed his quote saying that the different between the past and the future is a “stubbornly persistent illusion“

According to director Christopher Nolan Tenet is shaded with ‘apocalyptic sensibility’. It explores a wide range of contemporary themes: political and historical upheaval, the dangers of scientific advancement and impending environmental collapse. However, according to producer Emma Thomas the director never had any intention of making a ‘message movie’, it is as such not didactic. That said, with Tenet the director did hope to push the boundaries of cinema and with it our perception. “This liberation of our visualization of time that the camera provides”.

***UPDATE – WATCH MY YOUTUBE VIDEO ON DETERMINISM IN TENET***

The Secrets of Tenet

The Secrets of Tenet by James Mottram is the official behind the scenes book of the movie Tenet. This ‘making of’ coffee table book with forwards and backwards by John David Washington and Kenneth Branagh lays bare the creative process that went into this production. It also features never before seen photos, production art and storyboards. I have written a review for this book which you can read following this link. It is currently available for $43.99 as a hardcover from Amazon.

This screenplay is written by Christopher Nolan. At first I thought it was a novelization of the story. It is also known by the name Merry Go Round which is the working title for the movie. A review of Tenet The Complete Screenplay is available at the following link. It is an interesting read and explains a few of the subtle story elements. The screenplay also shows that the story still evolved during production, something that is more commonplace than people realize. The screenplay is complemented with a select number of storyboards. This includes the epic fight between The Protagonist and his inverted self at the Oslo turnstile.

The characters of Tenet

Below is a selection of short character biographies. Their backgrounds are mostly obscure, but I want to point out any salient details that may clarify some of the obscure aspects of Tenet.

The Protagonist has become inseparable from John David Washington, but the actor was by no means an obvious choice. In a film filled with well-known actors this choice is refreshing. The Secrets of Tenet explains what producer Emma Thomas wanted: “aspirational and sexy qualities of an international spy“. But she adds “we needed somebody who could really make the audience feel what he was feeling“. Tenet has been criticized for a lack of character development with regards to The Protagonist. I think this is unfair. He is a man on a mission and is focused. In the prologue he nearly died as the result of a failed operation so there will be doubt as to his abilities. Yet, by the end of the film he has regained his confidence. The Protagonist knows how to blend in and is unlikely to drive an SUV from the airport to the US embassy.

Neil is probably the most enigmatic character throughout Tenet. We know nothing of his origin, though I suspect he is from far in the future and has inverted back on the orders of The Protagonist. Some fans have theorized Neil may be Kat’s son Max. Yet, the screenplay makes no mention of this. Neil is the source of most of the movies initial humor with his fish-out-of-water Graham Greene character. But this is revealed to be an act to entice current Protagonist to work with him. Producer Emma Thomas states Robert Pattinson’s portrayal of Neil was deliberate in this regard: “Those people who live out of time and don’t really get a sense of where they belong”.  I watched Tenet amidst rumors Pattinson may become the next James Bond. With his numerous Indie roles (The Lighthouse) as well as Tenet he has put Twilight years behind him.

Kat is an unexpected gem in Tenet. Initially she comes over as just another secondary character that The Protagonist uses or consults to attain his objective of destroying Sator. Yet Kat quickly becomes a primary character as the mission cannot be completed without her. Elizabeth Debicki deftly plays the strong woman who has become trapped on a love-hate relationship with a monster. However Elizabeth Debicki states Kat is not a victim. She has tried to undermine Sator for a long time because he keeps their son Max from her. Up until she meets The Protagonist her schemes against her husband have largely failed.

Sator is without a doubt the antagonist of the story. When he is first introduced, he fully qualifies with regards the public imagination of what a ruthless Russian billionaire would be like. Yet as Sator actively uses time inversion for personal gain he become something else. Nolan describes him as “an animalistic creature”. Before the final act we learn that Sator is dying of cancer, probably related to his youth working at Stalsk-12 or from time inversion wounds. As such Sator plans to go out with a bang, using the Algorithm to permanently reverse time. Yet despite his casually violent behavior and complicated relationship with Kat he remains an enigma. Throughout the Tallinn sequence we discover Sator is actively using time inversion to undue past mistakes. As he receives time capsules from the future he remains actively aware of those people and agencies plotting against him.

Fay is a minor character in the movie. He is the handler for Protagonist and sets him onto the mystery of time-inversion after the terrorist attack on the Kiev opera. The character imbues the qualities of a classic spy master. Fay may not know the exact details of time inversion though he might suspect its nature when he warns Protagonist of the consequences should the mission fail. It feels like Fay’s role might have been larger in an earlier draft of the screenplay. No doubt his recurring role would have ensured Protagonist and Neil got the necessary logistical support. That also makes it clear why the role was cut to what it is now. The character sets the Protagonist on his journey. Fay is played by Martin Donovan.

Priya is an interesting character in this movie. Unlike Sir Michael Crosby she actually manages to help the Protagonist and Neil along. Yet she is also a red-herring. At first she is presented as an early villain and is nearly killed by Protagonist. This happened because she did not advertise she was closely cooperating with elements within the C.I.A. If she had, something would have been put on paper which would have alerted Sator when the information eventually streams back from the future. Throughout the story she consistently informs Protagonist to take a different approach in preventing Sator from assembling the algorithm. In the end her underhandedness gets her killed by Protagonist when she tries to have Kat killed in the epilogue. Kat informed Protagonist of potential danger, a warning that streamed back at him.

Barbara played by Clémence Poésy is another important character who only makes a brief appearance. A lesser script writer would have combined her character with that of Fay to save screen time. Yet Christopher Nolan goes through the motion. Barbara explains to the Protagonist the nature of the time-inverted objects that have been found. A clever demonstration using a 9mm bullet has both the Protagonist and the audience go ‘wow’. Clémence was apparently pregnant during filming, something I did not notice but is mentioned in The Secrets of Tenet.

Sir Michael Caine has become something of a lucky charm to Christopher Nolan, he has appeared in either small or large role in pretty much all of his productions since Batman Begins. In the notes to Secrets of Tenet the director admits the role of Sir Michael Crosby was created just for Caine. The role is not large, like that of Barbara and Fay it is there to push the story and the Protagonist in the right direction. Between jokes about snobbery and remarks about who tailor is best Crosby mentions Sator as the man most likely involved with the Kiev Opera House siege.

The script for Tenet makes it clear that Crosby does not know of the existence of time inversion. This makes sense, as a member of MI6 such information is recorded. That would signal the future and Sator about how much Crosby knows. Considering he is still alive, that would not be time inversion.

I hope you enjoyed this explanation of the movie. Over the coming weeks I will slowly expand its contend to also encompass some of the deeper themes. If you have comments or suggestions you can post them in the official movie discussion board. 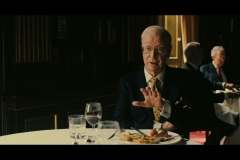 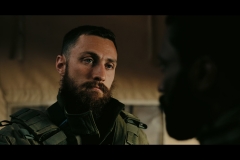 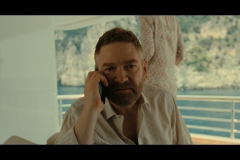 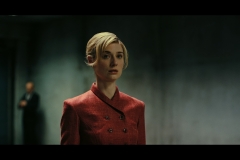 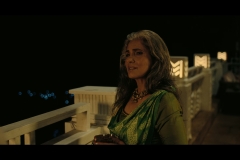 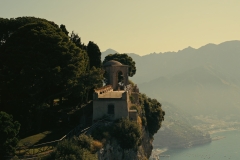 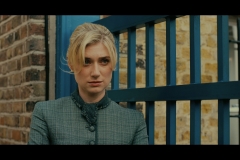 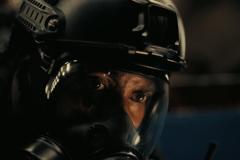 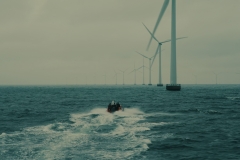 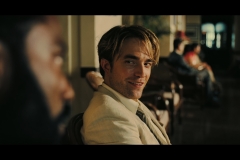 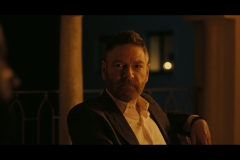 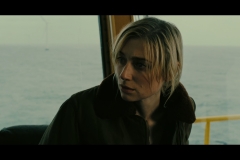 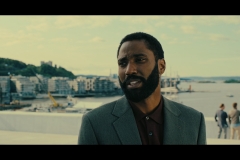 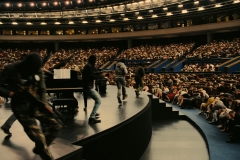