Family Time is the ninth and second to last episode of continuum’s first season. Unlike previous episode it is set almost exclusively on Alec’s farm. The episode acts a jump-board to the season finale ‘Endtime’ of next week. As such it offers less action and more drama as multiple plot threads need to be advanced.

The plot of Family Time…

Carlos (Victor Webster) and Kiera (Rachel Nichols) have come to visit the farm of Ann Sadler and Roland Randol to investigate the purchase of 1500 kg of ammonium nitrate. Alec (Erik Knudsen) and Kiera are surprised to see each other but Alec diverts suspicion by stating he recognizes Carlos from TV from the time when Carlos was a murder suspect. As Carlos and Alec’s stepfather try to find evidence of the purchase of the ammonium nitrate Alec shows Kiera his ‘setup’. Alec claims that he has almost finished fixing Kiera’s bodysuit but Kiera is more interested in whether Alec is covering for his extended families radical views.

In 2077 Kellog (Stephen Lobo) and his sister are being pursued by authorities after they have stolen thermite detonators which they are intending on giving to Liber8. Kiera is piloting a pursuit plane and fires rockets at them which fatally injures Kellog’s sister.

Back in 2012 Julian has become aware of Carlos and Kiera’s attempt at finding the ammonium nitrate and tries to block access to a barn. Kiera is immediately suspicious, especially when the barn is locked with a bolt. After Alec cuts the bolt they discover a truck with a bomb made with the ammonium nitrate. Just as Carlos suggests that Roland should be taken into custody 4 of Julian’s show up armed and take everybody hostage. Kiera and Carlos briefly manage to turn the tables on them but Carlos ends up shut in the gut by Julian (Richard Harmon).

Kiera and Carlos are locked up in the pantry while Alec, his mother Ann and Roland are held in the kitchen and attempt to communicate secretly with the police with a mobile phone. Kiera and Carlos attempt one more escape but are again caught, Carlos’s injuries are slowly becoming worse. One of the kidnappers, named Hoyt, shows himself to be a true narcissist and claims to have no qualms about sacrificing the hostages in front of the police even if they themselves were to die subsequently. Julian manages to persuade him that the plan to use the homemade bomb can still work. As the police are suspecting his father Roland to be in charge because of his anti-government views they could lay the blame on him. In order to escape Julian suggests they blow up the propane tank outside and then escape with the truck bomb.

Meanwhile Kagame and Sonya are watching events unfold on TV. Sonya asks if they should intervene but Kagame suggests otherwise by stating that everything he has become is because of what happened on that farm in the present.

Alec manages to get himself sent to his workroom with one of the hostage takers by stating he has a gun there that Julian can use in the escape attempt. After he manages to stun the hostage taker with Kiera’s bodysuit he activates her implant so she can contact the police on the perimeter and guide them. The SWAT-leader seems hesitant on accepting her advice but he is overruled by Inspector Dillon (Brian Markinson).

Alec manages to convince the hostage taker that his electrocution was accidental, he gains access to the pantry were Kiera and Carlos are held and hands her the bodysuit, now colored black because he thinks geeks would like it better. Carlos meanwhile slips in and out of unconsciousness, Kiera admits to him that she is from the future but it is not known if Carlos has understood her.

After Kiera has donned her bodysuit she starts to systematically knock out the hostage takers with the invisibility camouflage. Hoyt, Julian and two other hostage takers flee to the barn and start a firefight with the SWAT team. Kiera pursues them but is knocked unconscious when Julian manages to blow up the propane tank. The SWAT team now focus on the house where Alec, Roland and his mother held and still suspect Roland of being armed.

Kiera manages to stumble into the barn where Hoyt is attempting to start the truck, after a standoff Kiera is forced to shoot him dead when he raises his gun at her. Julian has slipped back into the house and holds his father Roland at gun point while Alec holds a gun pointed to Julian. Just as Roland has convinced Julian to hand him the gun the SWAT team enter the house and shoot Roland, killing him instantly. Julian manages to escape in the confusion that ensues.

In 2077, Kellog’s sister has died in his arms, Kellog drops the thermite detonators and casually walks into police custody after glancing at Kiera

In 2012 Kiera visits Kellog on his boat and asks for his forgiveness, Kellog says he is not angry with her, he considers Kiera to be the only person he can relate to. Kellog makes romantic advances to Kiera and says she should stop ‘living for a future that might never happened’.

In the last scene of the episode Julian is walking along a street in Vancouver when a phone at a booth begins ringing, as he picks up he hears Kagame’s voice telling him that somebody will pick him up and that he will be taken care off. As such the seeds for another standoff between Julian and Alec has been sown.

This episode was a significant departure from the format we have become used to. The storyline covers a lot of ground necessary for the season finale. Despite raising the anticipation for that episode considerably this episode does have a number of creative flaws which brings it to the bottom of the pile.

The fact that Julian has suddenly turned in to a terrorist wishing to use a truck bomb seems a bit farfetched and out of character, that he suddenly has a half-dozen heavily armed friends wanting to do the same ‘nuked the fridge’  for me.

Little things such as a ridiculously small lock on the pantry where Kiera and Carlos are being held and the strange tactics used by the SWAT team makes the plot twists feel too contrived. The death of Hoyt was the strangest thing ever as he only got shot in the shoulder. Roland’s death was too predictable but at least it made sure that both Alec and Julian have become committed to their own causes after having lost such a big ‘anchor’ in their lives. Overall, it was as though the writers had to guarantee that everything would be properly set up for the season finale but were at a loss about how to logically connect the dots. 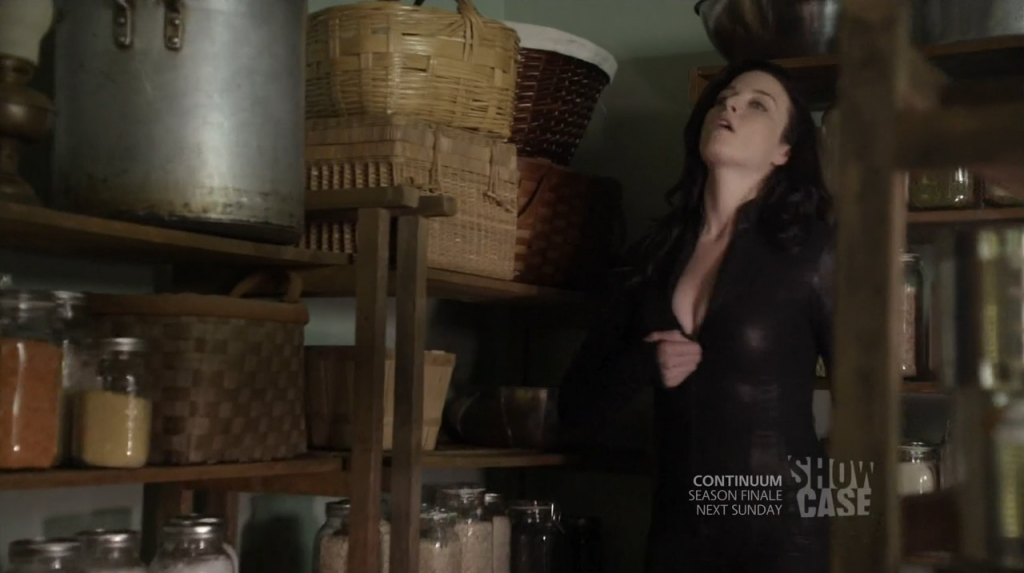 Other issues such as the dimwitted hostage takers and overly aggressive Julian and Hoyt also distracted from the storyline. Kellog’s flashback of 2077 thus felt underused and out of sync with the moral of the 2012 storyline.

I have already mentioned that ‘Family Time’ lays the groundwork for next week’s episode ‘End Times’ and I am eager to see what comes of Kiera’s confession to Carlos. Kagame statement of what happened on the farm seems to have a lot of meaning which I think is a comment about the adverse relationship between Julian and Alec. Overall, the best thing about this episode is the fact that Rachel Nichols once again wears the tight bodysuit as seen in the pilot.

Next week’s episode of Continuum is entitled End Times and will be the last episode of this season.