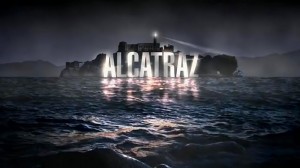 Early next year another sci-fi show will début from ‘Bad Robot Productions’, the first one being ‘Person of interest’ for CBS and the second being ‘Alcatraz’ for Fox channel. ‘Alcatraz’ will star lost actor Jorge Garcia as Dr. Diego Goto, an expert on Alcatraz island and especially the mysterious disappearance of 302 wardens and prisoners over 50 years ago. He will be joined by Rebecca Madsen, played by Sarah Jones (House, Sons of Anarchy). Together they investigate the sudden reappearance of the missing wardens and prisoners. The cast will also include Sam Neill (Jurassic Park) but it is unclear at this moment if he will appear as a regular or just in the pilot.

For now there isn’t much else to tell about Alcatraz, the pilot which was shown to select journalists was well recieved though the first half was said to be slow with the characters recapping everything known about Alcatraz island and its prison. ‘Alcatraz’ certainly isn’t going to have an easy task, it is set in a world that is very different from ours, shows like ‘The Event’, ‘V (new series)’ and ‘Jericho’ all failed because viewers could simply not recognise the world around them with the one that was shown in the series. In fact, excitement is added when extraordinary storylines happened but events are covered up (X-file, Stargate) or happened in a place separate from our known world (Lost). 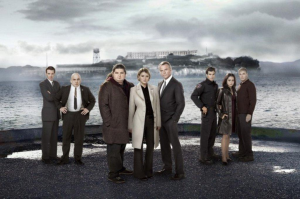 The premise of ‘Alcatraz’ would also give rise to the ‘Fringe’ problem whereby viewers are shut out when they miss an episode or two, for ‘Fringe’ this means a radical shift in the fourth season but if viewers leave during the first season then the show is dead in the water. Bad Robot Productions’ other new show ‘Person of interest’ with its somewhat CSI like formula has better odds defeating viewer fatigue.

The show does of course have excellent creative staff behind it, it was created by Elizabeth Sarnoff, a Lost acolyte of J.J. Abrams and so I am sure they are aware of the shows difficult premise.

Alcatraz will start to air probably during the first quarter of next year as a so called ‘Midseason replacement’.

For the full press release….
When San Francisco Police Department Det. Rebecca Madsen (Jones) is assigned to a grisly homicide case, a fingerprint leads her to a shocking suspect: Jack Sylvane (guest star Jeffrey Pierce), a former Alcatraz inmate who died decades ago. Given her family history – both her grandfather and surrogate uncle, Ray Archer (Forster), were guards at the prison – Madsen’s interest is immediately piqued, and once the enigmatic, knows-everything-but-tells-nothing government agent Emerson Hauser (Sam Neill) tries to impede her investigation, she’s doggedly committed. Madsen turns to Alcatraz expert and comic book enthusiast, Dr. Diego “Doc” Soto (Garcia), to piece together the inexplicable sequence of events. The twosome discovers that Sylvane is not only alive, but he’s loose on the streets of San Francisco, leaving bodies in his wake. And strangely, he hasn’t aged a day since he was in Alcatraz, when the prison was ruled by the iron-fisted Warden Edwin James (Coyne) and the merciless Associate Warden E.B. Tiller (Jason Butler Harner).

Madsen and Soto reluctantly team with Agent Hauser and his technician, Lucy Banerjee (Nagra), to stop Sylvane’s vengeful killing spree. By delving into Alcatraz history, government cover-ups and Rebecca’s own heritage, the team will ultimately discover that Sylvane is only a small part of a much larger, more sinister present-day threat. For while he may be the first, it quickly becomes clear that Sylvane won’t be the last prisoner to reappear from Alcatraz.

Through the course of the investigation, Madsen and Soto will learn that Agent Hauser has known about the prison’s secret history and has been awaiting for the prisoners’ return. Soto will witness his life’s work – the history of Alcatraz – come alive. Madsen will be forced to keep her supportive San Francisco cop fiancé, Jimmy Dickens (Cabrera), at arm’s length from the highly classified assignment as she sees everything she thought she knew about her family’s past shattered, all while fighting to keep the country safe from history’s most dangerous criminals.