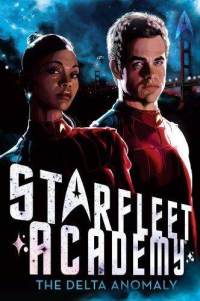 The Delta Anomaly is the first novel set in the new robooted Star Trek timeline. It is written by Rick Barber and targeted at young adults which brings us to the one major draw back of the Starfleet Academy series, namely that it supplants the adult novels that were planned but canceled.

The story itself is pretty straightforward (even for a young adult novel), while Kirk, McCoy and Uhura are attending the academy their friend Gaila (the green chick from the movie) is attacked by an unknown creature that is quickly identified as a serial killer from 20 years back called Doctor. The serial killer kills by removing selected organs from his victims. It is now up to the gang to catch this killer before San Francisco is turned into another summer bloodbath.

The premise for the book might at first sight seem unlikely for a young adult novel but the subject is dealt with cleanly and in an unprovocative way. The drawbacks of this novel are many. First like many novels for this reader class many events unfold in a deus ex machina way. Most notably in this the case the first chapter which sets up the events leading to Gaila’s attack. Secondly, this novels doesn’t adhere to Star Trek canon. It uses all the elements that are exciting such as transporters, supercomputers and high ideals but mixes them with technology and ideals from the present such as the use of currency, capitalism, gangs and even a degree of sexism (the action is always led by guys). In fact the writer Rick Barber either never watched the original Star Trek series and wrote this novel after a single viewing of the 2009 movie with the intention of reaching out to his readers by not alienating them with Gene Roddenberry’s high ideals. Either way, he failed. the high ideals of Star Trek are one of the most interesting aspects and their alterations in this novel distracting. The criticism is worse when you think that the young adults who are going to read this probably grew up on the Star Trek series.

Finally i will say that the novel is fun, the dialog is snappy and often humoristic though the characters do no deviate from their established traits seen in the 2009 movie. apart from the controversial end i am somewhat in a bind to recommend this to hardcore Star trek fans. For Young adults it is definitely a good read to get familiar with Star Trek.
Note; this is the first of four novels from the Starfleet Academy series, all four have been released.
Score; 7/10.