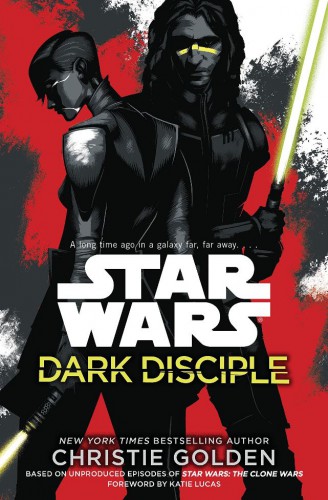 On the road towards Star Wars Episode 7 slated for December 18 LucasFilm is releasing new novels to fill in the storyline. I already reviewed Lords Of The Sith and gave it an average score. For a title as catchy as ‘Lords Of The Sith’ both Darth Vader and Darth Sidious were notably absent for most of the story. Can Star Wars Dark Disciple by Christie Golden do better? The title, Dark Disciple, indicates the reader can expect more Sith intrigue and this is correct. The story is set during the Clone Wars just before events of Episode 3. Dark Disciple is based on a script written by George Lucas’s daughter Katie Lucas intended for the animated series Star Wars The Clone Wars before it was cancelled. So what is the story about?

Star Wars tells the story of how the Jedi Council finally decided to assassinate Count Dooku. However, it is not Jedi Master Yoda, Mace Windu or Kenobi who does the deed. Instead Dark Disciple relies on two characters from the Clone Wars animated series who both have a considerable Expanded Universe fan base . The first is Count Dooku’s disgraced apprentice Asajj Ventress and the other is Jedi Master Quinlan Vos. It is to Vos that the assignment to assassinate goes, but he relies on Ventress to guide him to the dark side as that is what it takes to kill Dooku in cold blood. Ventress for her part is eager to avenge herself on Dooku, but does not want to take Vos down with her. The characters struggle against circumstance and against each other is the basis of Dark Disciple. It is very an exploration of the psychology of both Ventress and Vos.

Dark Disciple is a good novel, it is more focused than Lords Of The Sith. It deals with Quinlan Vos’s path to the dark side very effectively, but its light writing style also means there is no real deeper message. There is little exposition and so we learn little about the Star Wars universe that we didn’t already know. Last but not least readers already know that Ventress and Vos will fail in their mission. Unlike Frederick Forsyth’s novel The Day Of The Jackal there is no real suspense. With the Star Wars franchise as it is writer Christie Golden could write the hunt for Dooku any way she wanted as it never had to be realistic. The second half of the story also suffers as the to a degree the tension between Ventress and Vos has disappeared. Some secrets are still revealed but as the reader already knows them there is no thrill attached to those revelations.

At this moment I am doing a book giveaway for Star Wars Dark Disciple. Go to this page for the contest. Officially the contest was supposed to have ended on July 24th but I will extend it to Sunday July 26th. All you need to do is choose one of three novles you hope to win and say in one sentence what you think of SciFiEmpire.net